I have finally found a Clementa with an original movement. Note the similarity to the Telavox striking movement but with what appears to be the addition of a striking rack. It still has the Telavox style of striking motor over on the right of the main movement. Rather oddly there is no real striking mechanism.

The rack is gathered just like any other striking mechanism but seems to have the function of limiting going spring rewinding to a fixed maximum. 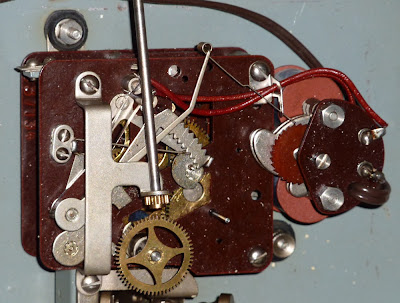 The clock is now running well with a new, flat-style 4.5 volt battery. It was reluctant to run at first but allowing it to strike repeatedly, by advancing the hands. rewound the going drive spring. A long, spring-loaded, hand adjusting rod is provided to avoid removing the clock from the wall when had resetting. The movement of this clock is slightly twisted relative to the dial which suggests somebody has dismantled the clock at some point. The backplate is also missing. At some stage somebody has sprayed paint across the insides. This shows up more in the bright lights of the video than still images. After I posted the above the rate of this clock repeatedly went completely haywire. It would run well for while and then started going very slow. When I received the Telavox papers I noticed a screw on the drawings with a mysterious description.  This screw quickly proved to alter the beat of the escapement but was incredibly sensitive. The tiniest turn of the screw would make the escapement “limp” badly. Eventually I found a mid-point and the clock has been running to time for 24 hours now. I had to keep lowering the pendulum clip, at first, using the big rating screw at the bottom. I had mistakenly tried to overcome the large losing rate. Before adjustment the clock was limping. but the tick is so very quiet I had no noticed the problem. Now I have it hanging on the wall beside my computer so that I can monitor it more closely. I still haven’t heard the rewind action yet. Which proves how quiet the Telavox movement really is.

I must warn against trying to adjust the torsion pendulum, suspension spring tension: