A going movement that wont go! 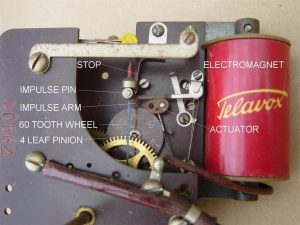 Here is my earliest movement by serial number. No. 00562. I have labelled the movement’s main parts and hope this will be clearly legible if you left click on the image. Back-click to return to the text.

Note the absence of a strike motor on the right. Instead of which a large electromagnet is fitted . This is one of only two non-striking clocks in my possession. The electromagnet rocks the small, oval fibre piece which I have labelled actuator. The actuator is fixed to the pivot of a rocking stator hidden out of sight between the movement plates.

The actuator also steps the 60 tooth ratchet wheel forwards. The pinion of 4 leaves rotates the brass wheel immediately below it and eventually drives the clock hands via further wheels and pinions. 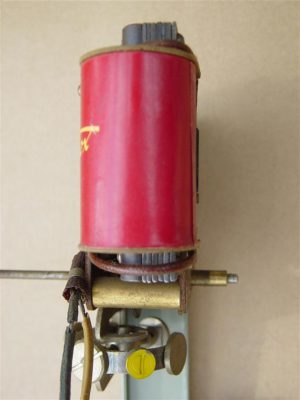 On my only other non-striking Telavox the application of a 4.5 Volt battery quickly stops the pendulum from rotating backwards and forwards! My hope is that the earlier movement can be made to run in order to discover the fault with the later example.

I was very disappointed to discover that a Telavox Repair Handbook listed online by the Danish Antiquarian bookshops had been sold or lost! Several decades of clock repair and collecting have not helped to fathom out the reason why this this clock refuses to run! The action seems very sensitive to the position of the Stop. Without a working example it is difficult to judge what the settings should be.

This older movement seems to have been attacked at some time in its history with a blunt screwdriver. Most of the visible screw heads show some damage.

This particular movement has also suffered from the breakdown of the battery lead rubber insulation. This has hardened and crumbled exposing the bare wires to shorting. This seems to have been a problem on some Telavox clocks as they clearly have non-original, much later battery leads. I have now replaced the damaged leads in an attempt to get the older movement to run.
*