The booklet was provided with a limited edition copy of an earlier Telavox loudspeaker. The booklet contains a short history of Telavox and has small black and white illustrations of the factory, staff and Telavox’ products. (but no clocks) It is written in Danish. 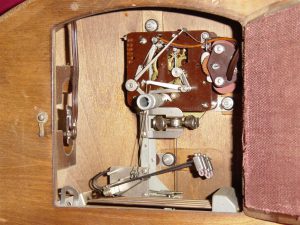 Ørn does mention that in WW2 production of radios had dried up. Whether this was because they were specifically forbidden by the German occupiers is difficult to judge. Later research suggests that radio valves became unavailable during the German occupation.

Fortunately, Jørgensen, who was the director of Telavox at the time, came up with a unique clock design with some advanced features. These movements would be built into a variety of high quality cases produced at their existing radio/loudspeaker factory in Vanløse. The factory had a staff of 250 at this point and the need to keep them occupied must have been a serious concern for the Telavox management.

Jørgensen’s clock proved to be an accurate timekeeper thanks to details like a bi-metallic balance on the torsion pendulum. Ørn claims the Telavox clock was twenty times as accurate as clocks made by competitors. The regular, short rewind period of a small driving spring by the striking movements could be described as a rementoir. This design maintains a much steadier torque on the going movement than a typical spring-driven clock which runs for a week.

Ørn states that 150,000 Telavox clocks were manufactured from 1944-1952. These had 4 different movements and ten types of case. More than I have seen so far in my quest for examples to collect or photograph. 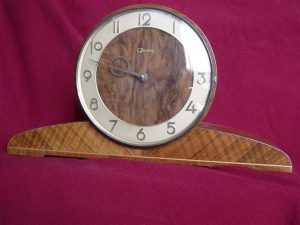 Here is my only example of a Clementa in a wooden case. Tragically it has been converted to a quartz movement. Though the case shows all the signs of having originally had a Telavox-type of movement.

The dial has a hinged bezel. All Telavox clocks which I have seen to-date have fixed bezels with hand adjustment from the rear. In the picture below I have opened the bezel to better show the Clementa signature. 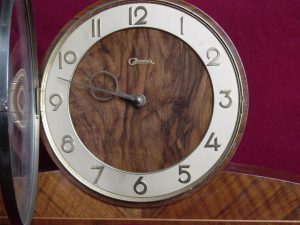 ote that the centre of the dial has been veneered. This is not a feature of any Telavox Clock that I have seen so far. It might be said that the dark hands and dark veneer do not make it easy to read the time in poor light.