*
A new owner of a Telavox has kindly sent me details and a link to some excellent pictures of his clock:

I have cropped, resized and adjusted the images slightly in PhotoFiltre to match the special requirements of the blog format. Without a little extra gamma and contrast blog images tend to appear dark and lack crispness. I routinely add gamma and contrast on all my blog images and may occasionally reduce the colour density slightly. This is no criticism of the original photographer’s images because I do exactly the same to my own photographs on all of my blogs.

Brass dial and fixed bezel, without the later chapter ring suggests an early clock.
Telavox’s typically attractive wood veneers with fine figuring and lighter box stringing for that extra touch of cabinet maker’s quality. Telavox left most other clockwork case makers well behind on quality. Telavox clocks are always attractive pieces of furniture in their own right. This one is head and shoulders above any clockwork “retro” clock. The large, clear dial is nicely balanced by the width of the veneered case. Producing an attractive and impressive clock for any mantelpiece or sideboard. 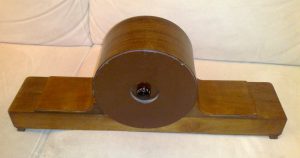 The rear view showing the fibre backplate also reinforces the style of an early clock. Fibreboard had a very long tradition in radio/electronics  production. A material which Telavox had used for  decades on their domestic electronics production pre-WW2. Note the typical, early, Telavox Bakelite, hand setting knob. Probably inherited stock from their production of electronics prior to the German occupation of Denmark during WW2.

An interesting shot of the undersides showing the Telavox serial number plate on the right and a rare rubber stamped date on the left. (as seen from this angle)  The quick-release, fibreboard cover rests below the clock. This provided tool-free access to the battery compartment and leads. 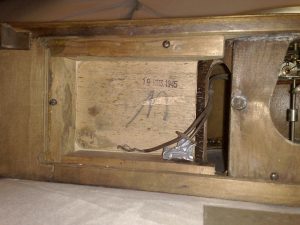 The date stamp of 19 Marts (Marts = March in Danish) 1945 confirms an  early clock too. Though there is no guarantee that these mysterious date stamps are contemporary factory markings. 8649 falls in 1948 in my own limited database. Yet 1945 date stamps appear on clocks of much later serial number.
The battery leads seem to have a round, fibre, two-pin plug as used by the large 3V cell. Yet there doesn’t seem to be enough space for such a large battery just here despite the quickly removable fibreboard cover. This may be an illusion of the viewpoint. The case may contain the earliest form of Telavox, non-striking, 3Volt movement. Hopefully the owner can confirm this later.
No sign of gongs through the aperture. I am having a little difficulty recognising exactly what can be seen through the aperture. There appears to be a Bakelite rating knob for a torsion pendulum and a hand setting shaft but I am not sure about the rest. (see also the image below) Is it really a rating knob? It would be the only one I have ever seen in Bakelite. The usual Telavox rating knob is a large, chrome-plated steel, straight-knurled screw head. Allowing the use of a screwdriver or finger adjustment. 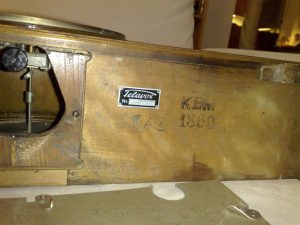 The Telavox serial plate is found on every clock. Sometimes on the back of the case though just as often underneath. As suggested earlier, 8649 falls in 1948 in my database. So there is some confusion here over exact dating.

It is difficult to suggest what the other numbers mean. They could be production or stock marks of the factory, a clock repairer’s, retailer’s or wholesaler’s marks. An auction house or even household insurance markings? KBM = København M? (Eng:Copenhagen Central ) Make your own guess. 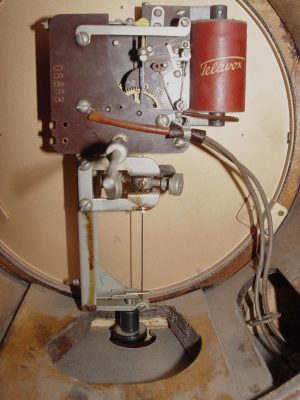 The owner has kindly provided confirmation of the non-striking, early, 3Volt Telavox movement with a new image. Note the fibre disk at bottom right. This usually has two dissimilar  pins which fit holes in the 3V battery. The different diameters of the pins would ensure correct polarity when “plugged” into the battery. In this case the disk seems to have lost its pins and the bare-ended leads simply pass through the two original holes where the hollow pins once fitted.

Those interested in seeing the owner’s much larger images may like to use the following link and select “Original”:

I have a similar (much darker) clock case with a 1945 date stamp but it has been converted to a synchronous, mains motor. Another similar clock case has a later, gong-striking movement.This suggest (to me at least) that this case style lasted for some years while Telavox clock movements continued to evolve.
Click on any image for an enlargement. Back click to return to the text.