.
TELAVOX was a Danish company which prior to WW2 manufactured radios, loudspeakers and radiograms.

The German occupation of Denmark during WW2 forced the company to find alternative products to keep the staff employed and the company running.

The Director chose to design and manufacture battery-driven domestic clocks. He designed an unusual movement 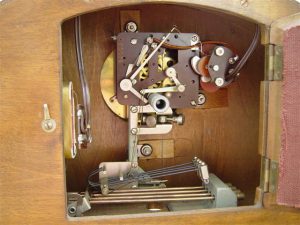 which utilised a torsion pendulum driven by a small spring. This driving spring was rewound at frequent intervals by the simple motor-driven striking mechanism. This method of operation resulted in excellent timekeeping since battery strength is completely divorced from the driving force.

The need for a variety of cases for these clocks must have kept the existing force of cabinet makers busy.

All striking models were powered by a 4.5Volt flat style of battery. These batteries were once commonly used for torches and bicycle lights but are rather more difficult to obtain these days. The battery was always given a secure resting place in a cutout within the clock case. Spring clips on short wire leads allowed secure battery connection to the movement.

Telavox movements were standardised into three basic types in all the examples I have seen so far: Non-striking, striking on a small highly-polished bell and striking on gongs. The number of hammers and gongs varies from one clock to another and may well have offered a choice to the paying customer. Or may have been available during a particular period of time.

All movements are separately marked with their own serial number hot-pressed into the fibre backplate. All cases have their own unique serial numbers on an attached metal plate. Often these are placed out of sight on the bottom of the case.

The image below shows an example of an early, non-striking movement with an unusually large battery space. Note the typical Telavox hand adjusting knob. Probably borrowed from the former radio department stockpile when radio production stopped. 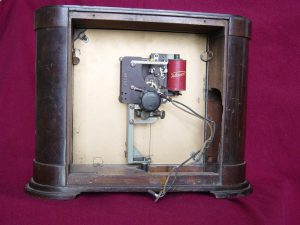 All Telavox clocks seem to employ a form of resin fibreboard, similar to Tufnol, for the movement plates. This material was very strong, non-corroding, offered low friction for the movement pivots, was electrically non-conducting and probably avoided the need for frequent oiling. (though not completely) This ideal material may well have been borrowed from their circuit boards used for their radios and gramophone audio amplifiers. The insides of all Telavox clock cases actually smell just like old radios.

Telavox had a long history of using very high quality veneers to finish their wood and plywood cabinets for their pre-war consumer electronics. This finishing method continued with most of their clock cases. The wide variety of superb wood veneers can be seen throughout this blog.

Some wall-hanging models were manufactured but the majority of Telavox clocks seem to follow the popular style of mantel clocks in a variety of styles. Though the quality of Telavox cases is often very much higher than mass produced, wind up clocks. The styling , though obviously a matter of personal taste, is often more refined than the more common spring driven clocks too.

Analysis of case design against case serial number suggests an evolution of case style over time. With earlier models no longer produced once newer models were introduced. (this case chronology has yet to be confirmed and is  based on a very small sample of those available)