*
Here is a scan of one page of a 1977 booklet celebrating the 50th Jubilee of an earlier Model A loudspeaker. Naturally it is written in Danish. I have paraphrased the contents as follows:

It discusses that radio valves had became unavailable during WW2. At that time Telavox employed 250 people. Telavox had been well known for many years for their high quality workmanship and had produced cabinets for Philips (in 1930) amongst other manufacturers.

Jørensen (the ø is pronounced rather like the U in urn) the then director of Telavox used a bimetallic balance on his Telavox clock design to avoid temperature variations in its timekeeping. The booklet claims that the Telavox clock was twenty times more accurate than competitors. It does not mention which competitors. Perhaps they simply mean all clockwork mantel clocks?

From 1944 to 1952 Telavox manufactured 150,000 clocks with ten different case designs and four types of movement in Vanløse. Jørensen retired in 1952 and sold the business. At which time clock production was split off from radio manufacturing. Those interested in the electronics side of the business may like to browse for images of Telavox. There are a number of websites showing Telavox’ domestic electronics products in the hands of private collectors.

Jørensen was obviously a far sighted and clever inventor. He designed and built a wind turbine which he placed on the factory roof. He hoped manufacture of turbines might be a future source of income and employment for his factory workers. The wind turbine produced electricity for many years and had a 10kW maximum output. Ironically Denmark now has the highest proportion of wind produced power than any other country and exports wind turbines all over the world.

Click for larger image. Back-click to return to the text. 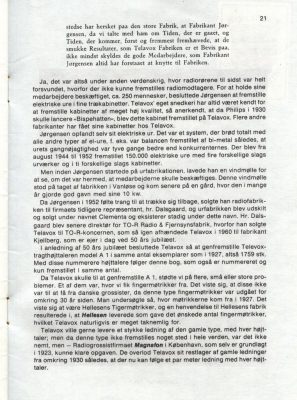